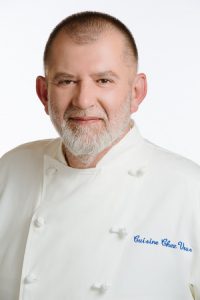 After graduating from the Culinary Institute in New York, James started his culinary career on the East Coast before taking his talents to San Francisco.  Drawn to the California restaurant scene he worked with chefs like Jeremiah Tower, Alice Waters and Wolfgang Puck who all had a similar desire to focus on modern American cuisine utilizing fresh local ingredients and breaking the bonds of the classical French cooking.

After 10 years of making his mark on the west coast, and meeting the love of his life, he returned to New England to bring his talents to Boston.  He spent time at L ’Espalier and St Cloud in the South End before taking over the helm as Executive Chef of Cuisine Chez Vous.  His breadth of work makes him an invaluable asset in the ever changing catering world.  His experience is why the quality remains consistent while his adaptability keeps the Cuisine Chez Vous kitchen ahead of the food trends.  When he is not in the kitchen you can find him at home behind the grill, spending time with his family, including his dog Harry and rooting for the Sox.